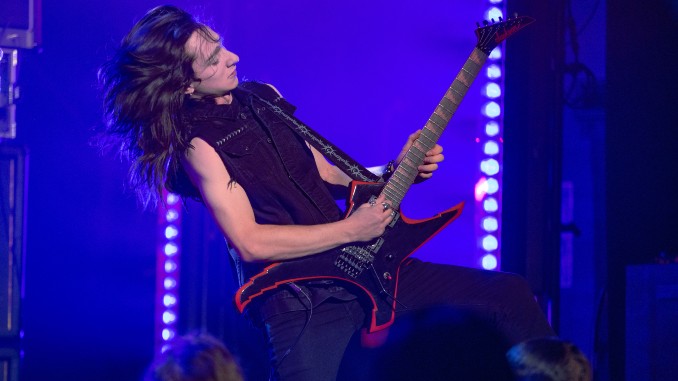 Director Peter Sollett (Nick and Norah’s Infinite Playlist) and writer DB Weiss (co-creator of The iron Throne) team up to tell an unlikely (but so relatable) story of teenage rebellion on Netflix metal lords. Centered on a trio of high school students who don’t fit in for their own personal reasons – whether due to skinny stature, niche cultural interests, or fluctuating mental health issues – and, as a result, form a nice heavy metal band. The stakes are raised when the school announces a battle of the bands, accelerating their motivation to ditch their repertoire of Black Sabbath covers in favor of original songs. Before they can seriously improve, however, the pressure of constant practice and young romance drives a wedge between the friends, threatening to shatter the group all together. Although much of the film feels like a heavy metal rip-off from school of rock, metal lords reveals deep sincerity. Of course, the motivations of these characters are totally insane, and the narrative can feel hopelessly contrived. But the film’s levity and palpable high school schadenfreude keep metal lords to fall into an uninspired pastiche.

Although most of his musical talent lies in playing snare drum in a marching band, Kevin (Jaeden Martell) is recruited by his best friend Hunter (Adrian Greensmith) to lead the drums of his heavy metal band, nicknamed Skullfucker. While Kevin doesn’t necessarily have the chops to play “polyrhythms,” Hunter knows enough about the genre and its broader subculture to give his friend a general crash course. During a cinematically stereotypical high school rage, Hunter becomes enraged at Mollycoddle, a band for hire that carelessly plays Ed Sheeran covers. He truly believes that Skullfucker is totally superior, despite the band not even having a bassist yet. After an altercation between proto-jocks draws attention to the boys, Hunter hastily proclaims his assured opinion. Amused by his arrogance, the members of Mollycoddle insist on facing each other properly in the next battle of the school groups – a challenge Hunter gladly accepts. With only a few weeks to hone their skills and find a bass player, Will hauls his massive drum kit into the high school band room to practice without disturbing his family’s neighbors. Coincidentally, a young British student named Emily (Isis Hainsworth) plays the cello at the same time, leading Will to believe that Skullfucker may have just found his bassist. Yet Hunter quickly fires her, citing Emily’s girly earrings and collection of sensible sweaters as the antithesis of what constitutes heavy metal.

While the film’s premise is appealing enough in its coming-of-age charm, the central characters themselves are intensely gritty. Audiences should ostensibly relate to the experience of being a teenage outcast, but instead we’re given a litany of reasons to root against them. Hunter is a self-obsessed, whiny asshole whose obsession with heavy metal borders on madness. Emily is completely two-dimensional, save for her random trait of sporadically turning off her mood stabilizers, which makes her prone to swear-riddled outbursts for minor inconvenience. Kevin, who serves as the film’s narrator and central protagonist, is so spineless it’s baffling why we’re following his inner self in the first place. However, their antipathy also conveys the harmful narcissism of being a young person, their moment-to-moment hyper-fixation to their respective cultural niches, and the elusive prospect of getting laid. It’s hard to tell if any of these characters really “develop” – an odd stagnation for an age plagued by personal experimentation and evaluation. There are some lukewarm reconciliations, interior monologues, and dramatic outfit changes, but that’s about all the growth goes here.

There are also striking similarities between metal lords and its 2003 spiritual predecessor school of rock, often looking more like a pale imitation than a friendly homage. In one scene, Hunter gives Kevin “homework”, writing a list of essential heavy metal tracks for him to study, reminiscent of Jack Black’s classic rock CD assignment. During the film’s third act, a near prison break occurs so the band can bring their founding member to the all-important gig, again mimicking the daring scheme school of rockYoung students run to bring their teacher to the battle of the gangs. The film’s heavy metal angle is somewhat new, but it certainly owes a lot to Wayne’s World, Aerial heads and of course, school of rock. What saves metal lords to feel totally unimaginative is its decision to portray two characters’ gradual immersion into the metal scene. Instead of being approached from a totally insular point of view, the film presents the process of developing a new musical taste, cementing itself in adolescent wonder of subversive discovery.


metal lords is adept at converting viewers into metalheads themselves, but that might leave veteran listeners wanting more. Rage Against the Machine’s Tom Morello serves as executive music producer (although his own band’s music is mostly absent from the film), delivering a soundtrack featuring the best of Metallica, Iron Maiden and Judas. Priest. Yet it also feels like a relatively paltry selection; some needle drops are even repeated, especially the opening licks of Mastodon’s “Blood and Thunder,” which feels a little lazy given Morello’s curatorial acumen. Yet, as a crash course for the ignorant, metal lords delivers plenty of earworms, including the original tune that Skullfucker eventually plays during the Battle of the Bands (co-written by Morello and Weiss). Clearly, a lot of heavy metal heart went into the film, even if it’s cluttered in its inspirations and rudimentary in its musical cues. metal lords may falter, but it never feels like a wholly serious subgenre study, finding the humor and absurdity of devoting one’s young life to a movement that’s far more popular than a few Portland-area teenagers might like to watch. ‘admit.


Natalia Keogan is a freelance screenwriter based in Queens, New York. His work has been featured in Filmmaker Magazine, Paste Magazine, and Blood Knife Magazine, among others. Find her on Twitter @nataliakeogan