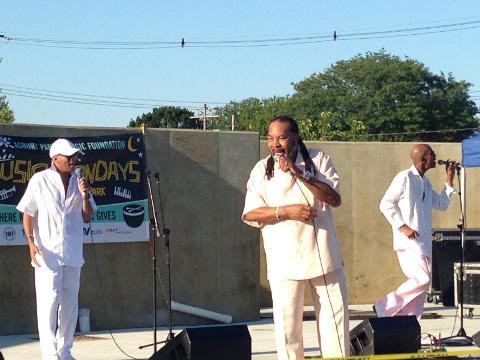 No roof, no problem.

The Turf Club at 1200 Springwood Ave. at Asbury Park is the last of the big clubs on Springwood Avenue on the city’s West Side that still exist. Lenny Welch, the Broadways, Clarence Clemons before joining the E Street Band, and others performed the spot in the 1960s.

Nowadays, it is just a shell of a roofless structure. That didn’t stop the Asbury Park African-American music project. The community group is looking to renovate the site, in part with income from its “Tuesday at the Turf” series.

â€œIt has its drawbacks because of the weather but in terms of COVID it’s a blessing because it’s outdoors,â€ said Jennifer Ward Souder, president of the

The first show was July 13 with Al Holmes and the Tribe. There was music, food, dancing and good vibes.

â€œIn every session there’s a core of people coming no matter what and all of a sudden you see a handful of new faces, so it grows up with different groups hearing about it,â€ said Souder.

Springwood Avenue’s once vibrant music and cultural scene came to an abrupt end in the summer of the 1970s when civil unrest tore Asbury Park apart. Blocks of Springwood Avenue that were not set on fire during the riots were then bulldozed in a failed attempt at revitalization.

The region’s musical history, which has ties to the Great American Songbook, Broadway, and decades of music charts, was almost lost. A fully functioning Turf Club will help recover this story, Souder said.

Bob Lee, who has played bass with Eartha Kitt, Cab Calloway, Denise Williams and more, will perform at Turf Club on Monday, August 30. The last Springwood Park show of the season will take place that week on Tuesday, August 31 with the Sensational Soul Cruisers.

Springwood Park is across from the Turf Club.

â€œI used to look out the side door of the Turf before I started playing there,â€ Lee said in a statement. â€œThe first time I played in the Turf, I was about 17. You couldn’t tell you were 21 because it was immediately suspicious, but if you told them you were 22, it was in. somehow believable. “

Asbury Amp, in addition to working on the renovation of the Turf Club, recorded testimonials about the history of the West Side from the people who lived there and created an online digital museum at www.asburyamp.org. There are several other groups in the city who are also working to uncover the lost history of the West Side. The new interest in the region is part of a current national calculation and rediscovery of black American history.

â€œThere are similar stories, all with their unique aspects but with similar narratives, which take place all over the country to varying degrees after being buried or communities displaced,â€ said Souder.

The most notable examples include the New York Times “1619 Project” and the recognition of the 1921 Tulsa Race Massacre on its 100th anniversary earlier this year.

At Asbury Park, the legacy of the West Side is being reclaimed.

“I think there is, in a positive way, a growing recognition of the value of these stories in themselves,” said Souder, “and in the places to which they are linked.”

Brielle Brown goes to ‘The Well’

Now try some music for mom. Singer-songwriter Brielle Brown of Shrewsbury is an intention musician who also happens to be a mother of young twins. His journey is described in his beautiful and deep new EP, “The Well”.

â€œThe art of motherhood is a work in progress,â€ Brown said in a statement. “And when it comes to my own story, I’m always ready to continue the conversation.”

There’s pop, gospel, R&B and more from â€œThe Well,â€ which beautifully frames Brown’s rich viola voice. She will be at the Saint in Asbury Park on Tuesday August 24 as part of a marathon version of the Acoustic Carousel hosted by Peter Scherer.

â€œThe Acoustic Carousel is an eclectic mix of music and poetry showcasing some of the best artists from the Asbury Park area who come together to bring unique style and performance to a night where so many of us perform together, this which always makes it a very special event. Scherer said via email.

Subscribe to app.com for the latest news on the Jersey music scene.

Chris Jordan, originally from the Jersey Shore, covers the entertainment and features of the USA Today Network New Jersey. Contact him at @chrisfhjordan; [email protected]